Recently it occurred to me that my knowledge of the origins of Thanksgiving in America was sketchy at best.

I had the simplistic schoolgirl belief that Thanksgiving originated in Plymouth, Massachusetts in 1621 when the English Pilgrims sat down with Squanto and a bunch of other Wampanoag Indians and had one great big happy feast. 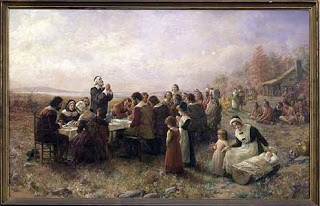 I thought we Americans had merrily celebrated in the same way for the next 392 years or so, except with more football and fewer Indians.

Like most things in life, the real story is considerably more complicated.

To begin with, the idea of holding a feast of thanks for a good harvest was not something new. Many cultures throughout history have held feasts and banquets honoring their individual deities or simply being thankful for the bounty.

Then there are numerous other claims on the holiday. Texans claim that the explorer Coronado hosted the first thanksgiving in May of 1541.

Others believe that the “real” first Thanksgiving took place in St. Augustine, Florida in 1565. 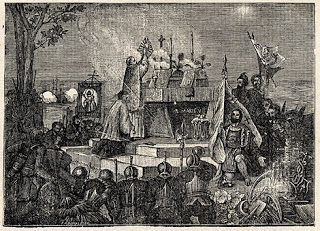 ST. AUGUSTINE, Fla. —Forget the turkey, the silly Pilgrim hats and the buckles.
Forget Plymouth Rock and 1621.
If you want to know about the real first Thanksgiving on American soil, travel 1,200 miles south and more than 50 years earlier to a grassy spot on the Matanzas River in North Florida.
This is where Spanish Adm. Pedro Menendez de Aviles came ashore on Sept. 8, 1565. This is where he, 500 soldiers, 200 sailors, 100 civilian families and artisans, and the Timucuan Indians who occupied the village of Seloy gathered at a makeshift altar and said the first Christian Mass. And afterward, this is where they held the first Thanksgiving feast.
The Timucuans brought oysters and giant clams. The Spaniards carried from their ships garbanzo beans, olive oil, bread, pork and wine. 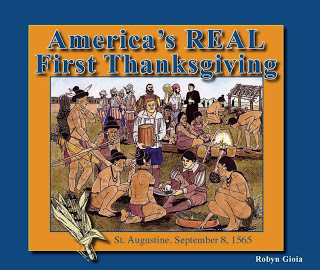 Virginians would tell you that the first ever “official” Thanksgiving on American soil took place in 1619 at Berkeley Plantation (a location which also lays claim to the perhaps-just-as-important distinction of being the site where Bourbon Whiskey was first distilled) along the James River in Tidewater Virginia. 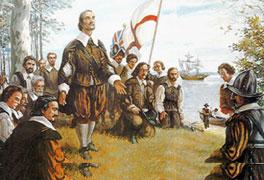 The first actual mention of the word “Thanksgiving” in early colonial history was not associated with any of the events described above. The first time this term was associated with a a feast or celebration was in 1623. That year the pilgrims were living through a terrible drought that continued from May through July. The pilgrims decided to spend an entire day in July fasting and praying for rain. The next day, a light rain occurred. Further, additional settlers and supplies arrived from the Netherlands. At that point, Governor Bradford proclaimed a day of Thanksgiving to offer prayers and thanks to God. However, this was by no means a yearly occurrence.

The truth is that many times when a group was delivered from drought or hardship, a day of prayer and thanksgiving would be proclaimed.

During the mid-1600s, Thanksgiving as we know it today began to take shape. In Connecticut valley towns, incomplete records show proclamations of Thanksgiving for September 18, 1639, as well as 1644, and after 1649. Instead of just celebrating special harvests or events, these were set aside as an annual holiday. One of the first recorded celebrations commemorating the 1621 feast in Plymouth colony occurred in Connecticut in 1665.

In 1782, near the end of the American Revolution, the Continental Congress issued a Proclamation of Thanksgiving to God for His deliverance of the newly independent Nation from her enemies. 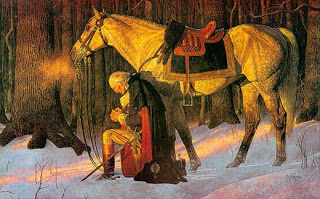 The first Thanksgiving Day proclamation in the newly established constitutional Republic, was delivered by His Excellency, President George Washington in 1789, following the precedent set by the Continental Congress in setting the date on the last Thursday in November.

Finally, Thanksgiving Day became a permanent holiday in 1863, when President Lincoln issued the proclamation that set the precedent for its annual celebration: 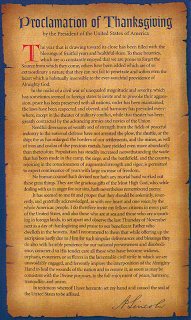 There are a multitude of  claims, then, as to what is the “real ” first Thanksgiving. But less important than which was first is the fact that throughout her history our Nation has sought to give thanks for the blessings and graces that have been bestowed upon her.

15 thoughts on “Much Ado About The Origins Of Thankgiving”