This charming poster is both educational and decorative. It’s a great reminder of what bee-friendly plants are blooming throughout the foraging season.

It’s available for purchase from Friends of the Earth.

I love Nepeta aka catmint!  It’s also a favorite of honey bees and other pollinators. It’s deer resistant too!

It is a beautiful plant to use in a border. Gertrude Jekyll wrote “it is a plant that can hardly be overpraised.”

I find catmint easier to grow than lavender. If you cut it back after first bloom, it will bloom again just as vigorously.

My favorite cultivar is Walker’s Low which was the 2007 Perennial of the Year. The name, Walker’s Low, does not refer to the size of the plant, but to a garden in England.

Plant some catmint this summer. Your buzzing friends will thank you! 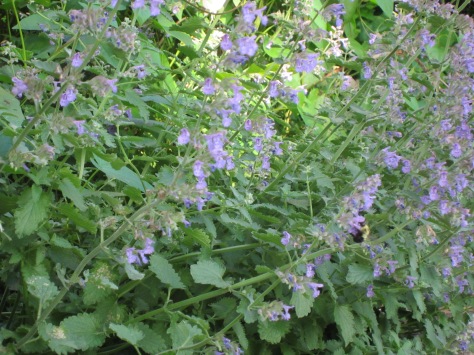 My back garden is, well, it’s very steep. I twist my ankle every time I take a stroll in it. I call it Mt. Everest.

Mt. Everest aka my back garden

I have some nice David Austin rose bushes planted in the border, but this year my gardening goal is to make a beautiful Gertrude Jekyll-style border for my bees who live at the bottom.

Bees at the Bottom of the Garden

So far I’ve planted lots of lavender and some lambs’ ears. Today I’m planting nepeta and lilies. I’m thinking about buying golf shoes to garden in.

To keep myself motivated, I’ll post the progress of my border throughout the rest of the season. Wish me luck!!

This isn’t really Miss Jekyll’s recipe, although I think she would like it. She adored lavender!

Yield:  6-18 tea cakes, depending upon size of the cake tin

Juice of one lemon

In a large mixing bowl, beat together the sugar, honey, and butter until fluffy and creamy. In a small bowl, beat the eggs until blended and pour them into the creamed honey, butter, and sugar, until just blended.

In a separate bowl, sift together the flour, baking powder, baking soda, and salt. Stir in the crushed lavender.

Pour in a third of the flour mixture, followed by half the buttermilk. Stir through the bottom of bowl, repeat with the flour, remaining milk, stir, and then the final amount of flour. Continue folding butter and flour mixtures together until a batter is formed and no large clumps of flour remain.

Pour the batter into the buttered tins. Bake in the preheated oven for 13-15 minutes for small cakes, or for 25-30 minutes for larger ones.

Meanwhile, prepare the glaze by juicing one lemon into a small bowl. Pour in two teaspoons honey and stir together with the powdered sugar until a fairly thick liquid is formed. Set aside.

Once the cakes are finished baking, let cool for a minute or so, then unmold the cakes onto a cooling rack or plate. Immediately drizzle over the glaze. Enjoy warm or completely cooled. Excellent with tea.

There is no spot of ground, however arid, bare or ugly, that cannot be tamed into such a state as may give an impression of beauty and delight. 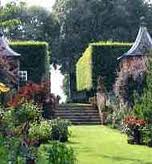 Gertrude was born into a prosperous family and was educated in the arts from an early age. Jekyll’s brother, Walter, was a friend of the author, Robert Louis Stevenson, who borrowed the Jekyll family name for the title of his psychological thriller, Dr. Jekyll and Mr.Hyde.

When she was 18, Jekyll was admitted to the South Kensington School of Art, where she studied painting, as well as botany, optics and the science of color. She would have had a career as a painter had not her sight begun to fail. 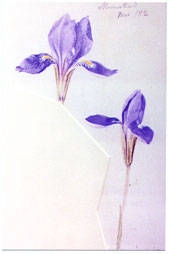 As her eyesight dimmed, Jekyll conceived the idea of creating art works from flowers and shrubs, and turning the design of gardens into an art form. She started to design simple cottage gardens and, as her career advanced, produced grand designs for country houses.

Jekyll was greatly influenced by William Morris, one of the founders of the Arts and Crafts Movement in art, architecture, and crafts during the late 19th century.  Morris advocated a return to an informal planting style based upon an idealized English cottage garden.  Jekyll shared Morris’s mystical view of nature and drew on the floral designs in his textiles for her garden designs.

In 1889, Jekyll was introduced to the architect, Sir Edwin Lutyens, with whom she began an association, creating landscapes for his avant-garde constructions. This successful partnership, with each influencing the other, resulted in one hundred Lutyens/Jekyll designs and greatly contributed to the English way of life.

Jekyll was a formidable plants-woman, who experimented with plants in her own garden at Munstead Wood in Surrey before recommending them to anyone. She taught the value of ordinary plants familiar to gardeners today, Hostas, Bergenias, Lavender and old fashioned roses.

Gertrude Jekyll concentrated her design work on applying plants in a variety of settings, woodland gardens, water gardens and herbaceous borders always striving to achieve the most natural effect. She had an artist’s eye for color and contrasted plant textures to great effect. 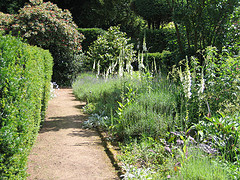 Jekyll was the author of 15 books, her most famous being Wood and Gardening, a guide to the creation of gardens in a variety of climates and conditions. She was a prolific designer, completing around 350 commissions in England and America, many of which still exist today.

In 1986, the rose breeder David Austin created a deep-pink shrub rose and named it in Jekyll’s honor. 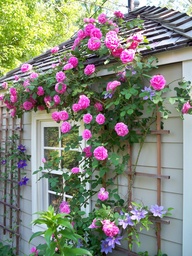 Jekyll died on December 9, 1932 at Munstead Wood, Surrey. She is buried in St John’s Churchyard, Busbridge. On her tombstone is inscribed the simple epitaph by Sir Edwin Lutyens, ‘Artist Gardener Craftswoman’. 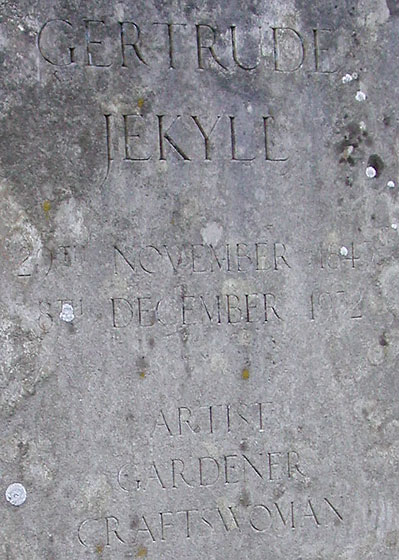 This is a beautiful David Austin rose.  One of his most popular!!

It has beautifully cupped double blossoms of rich pink. It produces arching stems to 5 feet or more and 3 feet wide, making it an ideal candidate for training up a low structure.

Most English shrub roses bloom from spring to fall, with large, single to double, mostly fragrant flowers. They make ideal companions in mixed borders, in hedges, or as specimens.

Grow in fertile, moist, well-drained soil in full sun or partial shade. Provide good air circulation and remove fallen leaves to help prevent disease. Prune lightly or back by up to 1/3, reducing side shoots by 1/2 to 1/3. To renovate, prune one in four or five shoots from the base. 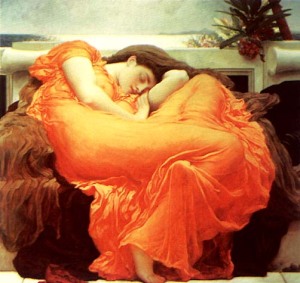 “What is one to say about June, the time of perfect young summer, the fulfillment of the promise of the earlier months, and with as yet no sign to remind one that its fresh young beauty will ever fade.”
–  Gertrude Jekyll, On Gardening

Herbaceous borders are reaching their early summer peak and the kitchen garden is becoming productive.

Get those warm season vegetables planted! Young starts of tomatoes, peppers, corn, eggplant, cucumber and squash can be planted now that all danger of frost has passed. This should be done without delay, especially if you live in a region where summer is short.

Keep newly planted trees and shrubs consistently moist. This is especially true as we head into the dry summer months. To make this task easier, use water bags around the trunks.

Check your roses for pests and diseases. Blackspot, powdery mildew and aphids usually start appearing in June. As soon as a problem is detected, treat it with an earth friendly spray such as Garden Safe’s Fungicide 3-in-1, which tackles disease, mites and insects. It may be necessary to maintain a regular spraying schedule over the course of the summer.

If your spring blooming perennials are starting to look a little worse for wear, cut them back to encourage new healthy growth. It’s safe to do this until mid-July.

Vining plants often put on lots of new growth in short periods of time. One way to tame the tangle is to use dental floss to tie vines to their supports. The floss is easy to carry around by just sticking it in your pocket, needs no scissors to cut it, and if you use the green, mint-flavored type, it almost disappears next to the vine’s stem.

Sow seeds for biennials such as hollyhock, sweet william, campanula and foxglove for blooms next year.

Cut lavender blooms in early morning before the sun burns off the aromatic oils. After the flowering stops you can lightly prune the plant to keep it in shape.

Fill in empty spaces in the herbaceous border with annual bedding plants. Begonias, geraniums and heliotrope are good, bee-friendly choices.

Apply compost to feed your plants!

Italians love flowers, and that includes people as well as bees. 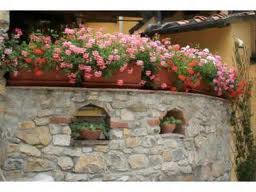 The geranium is the flower most commonly associated with Italy.  Both zonal and ivy geraniums are popular choices for the balconies and terraces of Italian homes.

Geraniums also fit nicely into an English cottage garden. Gertrude Jekyll pronounced that “[t]here are no better summer flowers than the single and double zonal pelargoniums that we commonly call geraniums…”  She used them to fill in bare spaces in the border and in containers. They are still perfect for those purposes. 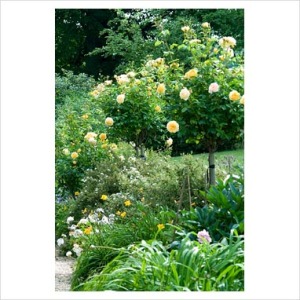 White Geraniums in a Sunny Border

While pelargoniums do not have the reputation of being popular with bees, that has not been my experience. They seem to especially love the ivy geraniums in my window boxes.

I fell in love with this shrub at the Chicago Botanic Garden. It took me a few days to find out what it was because we were “driven out of the Garden” by a lightning storm.

It turns out it is Variegated Weigela Florida, beloved by bees and other pollinators everywhere. I ordered one on Amazon (they sell everything!!) and will be planting soon.

You really can’t have an English cottage garden without a few hydrangeas. I have all kinds in my garden, from the old fashioned Nikko Blue to the new easy-care, repeat blooming cultivars Limelight, Little Lamb, Endless Summer, and Annabelle. 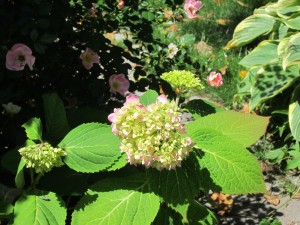 Gertrude Jekyll noted that hydrangeas are very useful for keeping the border full and beautiful throughout the growing season. Maybe that’s the reason I keep planting them…